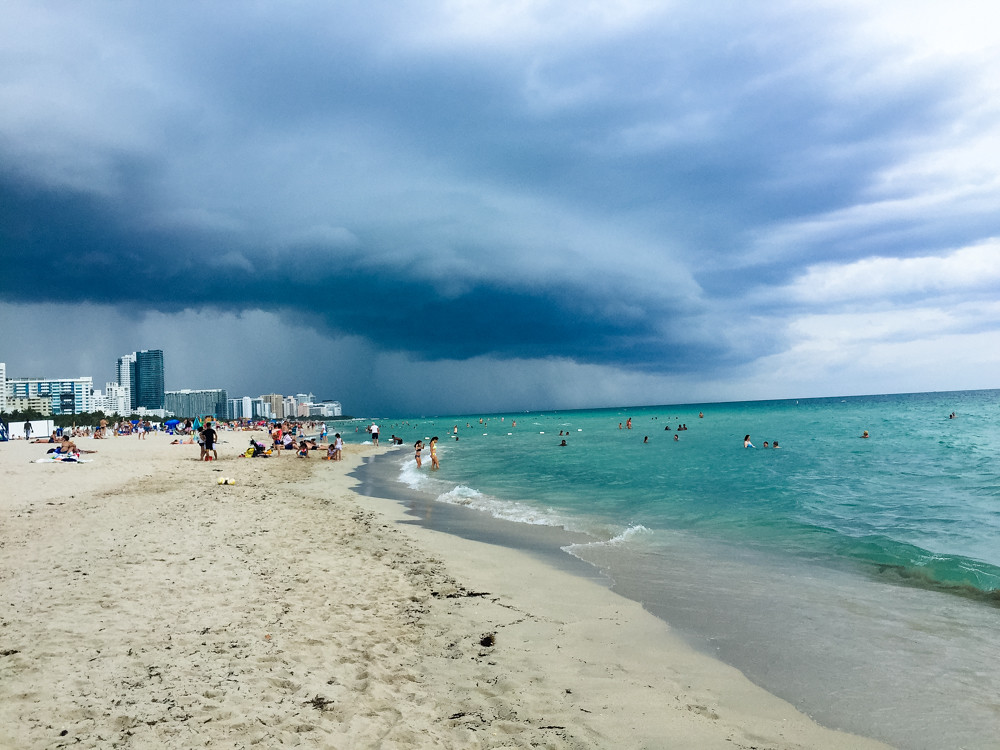 After an overly cautious trip to Mexico, Miami was a sigh of relief because I knew that if anything bad happened on US soil, I could call Olivia Pope as my “fixer.” 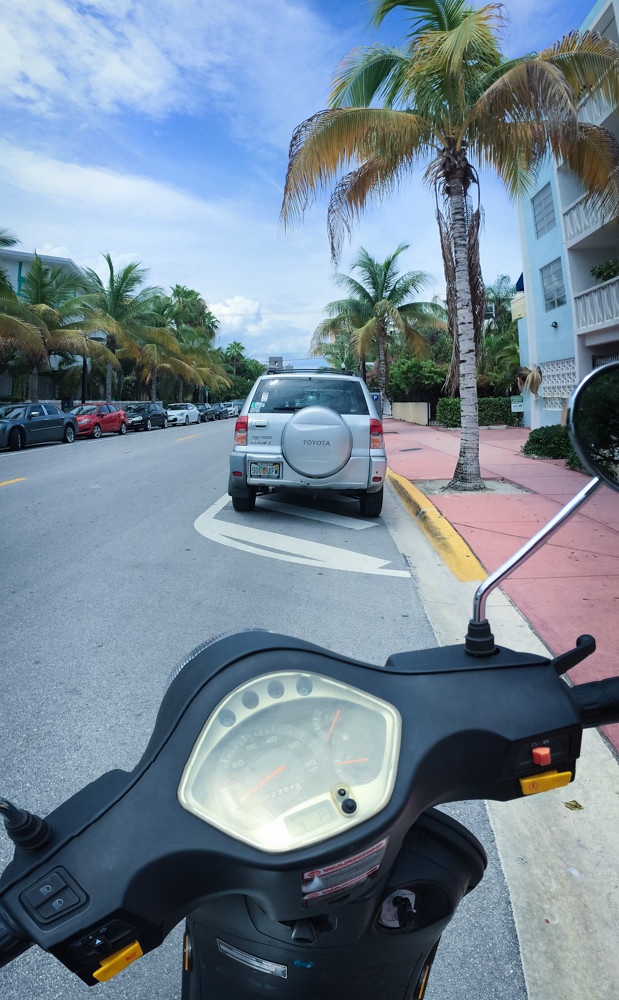 After we left the airport, we immediately went to the South Beach area for scooters. The shop owner must have had it out for me because she gave me a scooter with a broken fuel gauge, a maximum speed of 11mph, and a very moody ignition that was never in a good mood. Here’s one of the moments when I needed it to start and it wasn’t in the mood:

Even though the scooter was rebellious, rarely started after it turned off, and fell apart while I drove it (I had a pocket filled with scooter parts that fell off), it was lots of fun. We rode around the city for about 5 hours and explored the entire Miami Beach area in record timing. Then we went to play basketball.

Basketball was fun because I won. I didn’t just win, I demolished. This paragraph won’t make my cousin too happy because sometimes the truth hurts.

After an intense game of basketball, we retired to the hotel to spend the remainder of the night. Since we were only staying at the hotel for a couple of hours and had an early flight, we chose a place that was near the airport for a reasonable cost. We were pleasantly surprised once again when we went to the room and it exceeded our expectations with its full kitchen and new fixtures and appliances. However, this hotel had one massive downside that seemed to affect me the most.

We were in the middle of a game of monopoly on our iPads when I leaned over to turn on the air conditioner. Suddenly, out of the corner of my eye, I saw a cockroach that was the size of a Nissan Altima. It stood right next to my bed and froze when he saw me. I immediately yelled, “THERES A ROACH ON THE FLOOR!!” With reflexes of a jaguar pouncing on its prey, my cousin sprung off his bed and landed on the floor within a foot of the roach. We quickly strategized on how to end the roach’s life and since my cousin demonstrated a stellar reaction time and exceptional speed upon hearing about the roach, we agreed that he’d be the one to introduce the roach to his Roachy God. He grabbed my sneaker and prepared to crush the roach and the next few seconds happened in slow-motion…

As he lowered my sneaker onto the roach, the roach looked at the sneaker with an expression that said “I AINT DYING TODAY! I’VE GOT A WIFE AND KIDS BACK AT HOME!!” Then he quickly ran under the air conditioner to freedom. My cousin’s speed and prowess was no match for the roach’s wit and agility. But the huge problem was that I had to sleep in this room with a rabid, intelligent cockroach! I called the front desk and explained the cockroach situation and they said “sir, it’s 1am and we can’t do anything about it. Call back at 9am.” This solved nothing since our flight was at 7am. So I slept with one eye open to protect the both of our lives.

The next morning, we boarded our flight for New Jersey and we were in the air for about 20 minutes when the pilot mentioned that something was wrong with the plane and we had to land immediately. Surprisingly, everyone remained calm as we circled around for 30 minutes to burn off fuel. Then the pilot made another announcement that sent everyone into a panic. You could hear the stress in his voice as he sternly announced that everyone must stay in their seats and shouldn’t move AT ALL. Suddenly, the flight attendants rushed over to the exit row behind me and said “are you all ready to help everyone survive if something happens to the plane?? This is the moment that we told you all about! Review the emergency pamphlets now!!” The girl behind me immediately started hysterically crying, which made a number of people panic. The situation became more intense when the pilot told us that the airport doesn’t want us to land until the hospital is prepared to handle all of us in case something happens…how comforting. 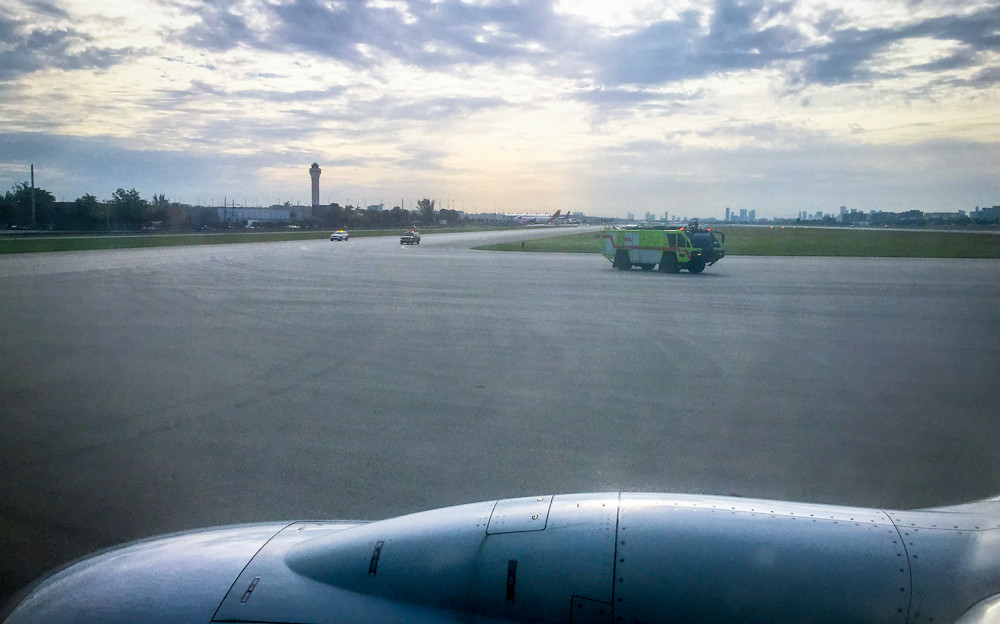 When we finally landed, we had a wonderful welcoming party on the ground that consisted of fire trucks (that repeatedly circled the plane), police cars and ambulances. They cleared us to disembark and then we spent the next couple of hours in the airport hanging out in a seemingly abandoned terminal. Seven hours later, we were back in the air and enroute to Newark, New Jersey where we landed safely a few hours later. The best part was when my local Tesla service center sent a Tesla P85D to pick me up from the airport and take me to my car because they’re great people and heard about my wonderful ordeal.

Despite the rabid roach and the frantic flight, everything was all good when I returned home…alive!

Mexico, Can I Trust You??